What's in a Name?

Naming characters is sometimes the easiest part of a book and sometimes the hardest. Some characters name themselves. A name just pops into my head that would be perfect for the person I’m writing about. Other times, nothing feels right. Or when I do finally come up with a name, it’s too close to the name of another character in the book and I can’t use it.
One of the things you have to keep in mind about naming characters is not just what the name sounds like or what it may mean. It’s also important to see how the name looks written out on the page. Try writing about characters named Bryan and Byron in a book and see how fast your editor breaks out the red pen. (Of course, there’s always an exception to any rule. Check out: Will Grayson, Will Grayson by John Green and David Levithan. No, seriously. Check it out. Loved it.)
For Love, Hollywood Style, I had pretty much the easiest time ever naming my characters because I did something I’ve never done before and will probably never do again. Since the book is a romantic comedy set at a movie studio, I named all my main characters after the characters in one of my favorite movies of all time: The Philadelphia Story.
Tracy = Tracy Lord (Katharine Hepburn)
Dex = C.K. Dexter Haven (Cary Grant)
Connor = Macauley Connor (Jimmy Stewart)
Liz = Elizabeth Imbrie (Ruth Hussey)
Even though there are no real parallels between the two stories, it was my way of paying homage to a true classic romantic comedy. If you like witty dialogue and snappy comebacks, I highly recommend The Philadelphia Story. It is one of the most sharply written movies ever.
Posted by P.J. Ruditis at 10:13 AM 1 comment:

People actually ask me this question all the time and it's something I've often wondered about my own favorite writers. I just finished a huge long book with (what seemed to me) a thousand characters. I actually had to make a list of all the first and last names and post it near my computer so I wouldn't repeat any. Still, I made mistakes like calling the dad "Don" in one chapter and "Dave" in another (there's always a Dave in my books.)
I actually don't love choosing names--I'm always anxious the name will sound silly or too trendy or just weird. I usually try to play it safe: first names are those that are appropriate for the age of the characters--for instance, no mom is going to be called "Taylor" but a twelve year-old girl might. "Mildred" is better for the grandma than for the five year-old little sister. I usually choose first names that are short, one or two syllables, and not overly distracting. No "Siobhan," for instance. (No offense to all the Siobhans out there.)
Last names are harder--usually I'm also looking for a short, non-distracting name. But it also has to sound "real"--as in not overly bland. So I often use last names of people I know--friends, neighbors, former math teachers, etc. It's also a nice way of paying tribute to my favorite people--there's been a "Kohli" in my last two books, which is my best friend's last name.
Posted by Emma at 6:14 AM No comments: 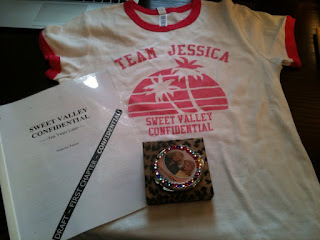 On this blog, we talk about the Simon Pulse Romantic Comedies (I know-- big duh, right?). Modern, contemporary romances are one of my favorite genres to read -- and to write!

But as a writer, I owe a huge debt of gratitude to one of the original young adult romance series, Sweet Valley High. It’s not an overstatement to say that my love of Sweet Valley is in large part responsible for my decision to forge a career in young adult publishing. Imagine my thrill, then, to be invited to join a small circle of diehard Sweet Valley fan bloggers to meet with Big Fancy Publishing People to talk about the release of the upcoming sequel: Sweet Valley Confidential!

For anyone who’s ever had a love-hate relationship with the Wakefield twins (and with series for readers of all ages in print, who hasn’t?), this splashy, soapy follow-up (Elizabeth and Jessica are 27!) lets us catch up with the whole crew.

Over lunch (including yummy tiny cupcakes!), we readers talked about what exactly we loved about the series, and how we thought we might be able to build buzz for the book before its release next March. We filled pages and pages of notebooks with ideas, many of which will be rolled out very very soon. You’ll have the chance to read early chapters from Sweet Valley Confidential, to win swag like that pictured above (a teaser chapter from the book, a “Team Jessica” tee shirt, and a sparkly Wakefield compact mirror!), and much, much more!

I’ll be blogging about the first chapter of SV Confidential soon, but in the meantime, whether you’re new to the series or a long-standing groupie, now’s the time to get reading! It’s pretty sweet stuff!

Oh -- and let me know: Team Jessica, or Team Elizabeth? If you're like me, you're probably a little bit of both!

Posted by Micol Ostow at 1:26 PM No comments: 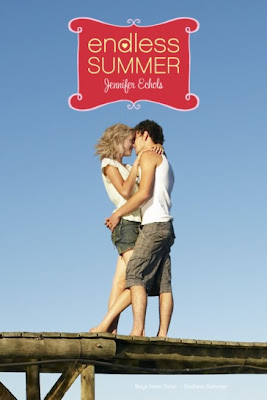 I'm so happy to announce that after only a couple of weeks in stores, Endless Summer has gone into its second printing! That means YOU bought a copy at the bookstores and told a friend about my book, and I appreciate you.

So of course I'm answering the question of the month with Endless Summer on my mind. Here's how I came up with the characters' names:

LORI: I really just used this name as a filler until I could go back and change it. I meant to do a search-and-replace in Word with a name I liked better. Unfortunately the cover was designed before I finished writing The Boys Next Door, and Lori's name was on it.

ADAM: I give my heroes names that I love but that don't really remind me of anybody: Adam, Nick, Drew, and currently, Hunter.

SEAN: He is named after Sean Penn. Remember in Truth or Dare, I think, when Madonna says Sean is the love of her life? You could really see in her face that she pined after him, and that's how Lori feels about my Sean.

CAMERON: He is named after the adorable but unfortunate best friend in Ferris Bueller's Day Off. I'm showing my age here.

MCGILLICUDDY: Lori's older brother is named Bill, but everyone calls him by his ridiculously long last name. The power of naming is very strong. I get to do it as the author, because I'm inventing this world. Parents get to do it for their children. And if a kid gets to name his friends with nicknames that actually stick...well, that's a very powerful kid. I gave that power to Sean to show you how he glows with an aura of popularity, and therefore why Lori would fall for him, and why all of this would drive his little brother Adam completely insane with jealousy and outrage.

So...I thought it would be funny for Sean to call Bill by his excruciatingly long last name until it caught on. I literally went through the phone book and picked the longest name I could find that seemed to fit.

I'm really pleased with all my choices. Except for Lori. Too late now...
Posted by Jennifer Echols at 7:13 PM 5 comments: