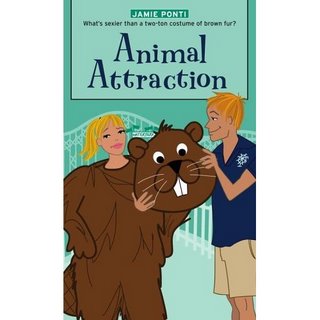 Not only has Jennifer set up a wonderful web-site, it turns out that she has great taste in music as well. Earth, Wind and Fire rocks. (I must have grown up around the same time and place, because our high school band played it too.) It made me think of something I did for Michelle Nagler, the awesome editor at Simon Pulse who handles most if not all of our manuscripts. I went onto I Tunes and downloaded all of the songs and music that were referenced in Animal Attraction. (There was a lot more than I realized as I was writing it) Then I burned a disk for her and sent it to her so she could have the "unofficial official soundtrack." Here were the cuts on the disk: Summer of Love by the B-52s, In da Club by 50 Cent, Lets Get it Started by the Black Eyed Peas, Rich Girl by Gwen Stefani & Eve, She Will be Loved by Maroon 5, Suffer Some by Jane's Addiction, Lollipop by LL Cool J, You Raise Me Up by Josh Groban, American Idiot by Green Day, Yeah! by Usher, Hey Ya! by Outkast, Vertigo by U2, Good Riddance by Green Day, La La by Ashlee Simpson, One Love by Bob Marley and the Wailors, Let the Music Play by Shannon and Your Body is a Wonderland by John Mayer. It's not that I'm a big fan of all these songs, but each is in there for a reason. And it's one of the reasons I like writing books. When I work in television we have to actually pay the groups to use the music, but in a book you can choose whatever music you want.
Posted by Jamie at 6:28 PM

I don't mention a lot of songs in my books, but I ALWAYS make a soundtrack for myself on my iPod and listen to it while I jog. It helps me brainstorm. I never thought of sending it to Michelle. I wonder if she'll come in to work at Simon & Schuster tomorrow and find a pile of CD mailers on her desk from all of us. LOL!