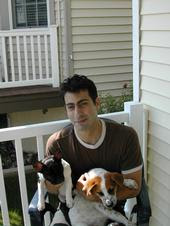 So, it turns out that Bridget Jones has doggie separation anxiety.

This is not a joke.
After the umpteenth time coming home to find my mail shredded and my bed turned inside out (NO. idea. How she does that.), Noah decided it was time to be proactive. While I slumped over on the couch, managing only a weak, rueful shake of the head, Noah hit Google. Her symptoms, such as they are, only seem to take place when we are not at home. Tendency to bite or chew? Yes. Tendency to have "accidents" inside, even after housebreaking? Check. Becoming overly excited when we come home? Well, yeah, but that one's really cute so it doesn't bother me that much.

If your dog has one or more of those symptoms, he/she has clinical anxiety disorder.

My dog has ALL of those symptoms.

Since the treatment seems to be either doggie Prozac (which...no. Just...no.) or behavior modification, I now find myself staging elaborate "practice leaving" sessions wherein I zip myself up in my parka and perch down on the couch. I'm also not allowed to make a big fuss when I leave or when I return. It's all about playing hard to get with Miss Jones.

Have I mentioned that my grandfather was a fairly esteemed psychoanalyst (in as much as an analyst *can* be "esteemed;" I mean, he wasn't Freud), and that seventy-five percent of my family members are either therapists or extremely well-therapized? So I guess it's only natural that I'd end up with the most neurotic pooch in the Tri-state area.

Obviously I adore her anyway.

LOL! I don't have a clue how you can stop the enabling -- or even whether you should.

But you made me laugh.

Oh, boy! What a problem to have! Poor Bridget Jones :(