Leavin' the Laptop Behind!

As promised, Korea pics! I left the laptop behind for the first time ever, but apparently I did not leave the guilt. I THOUGHT I had, since I made a conscious decision to make the Korea trip a total writing vacation. But then, as I was window shopping in Insadong, Seoul, I saw this: 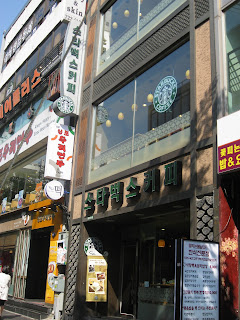 I'm sure it says "Starbucks", but the instant I saw it, a little voice in my head translated it to, "Why are you shopping when you should be writing? In here? With a venti nonfat latte nearby and oodles of words flying onto the page?"

But since I refuse to write by hand (it's completely illegible, even to me), and the laptop was a few thousand miles away, I marched right down the street and plunked down some Korean Won for a funky green pot to put on my desk. Then the next day, I visited the DMZ, which I highly recommend doing if you're ever in South Korea. It is the ultimate way to NOT think about whatever writing/cleaning/other project you should be doing.

Other trip highlights: Visiting three different Buddhist temples (one at 4 am so I could be there when the monks rang the morning bells), three different palaces, and two local markets (mostly so I could check out the food, which is sold by friendly people like this): 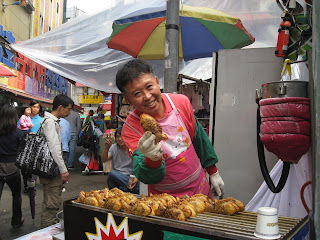 The highlight of the trip, however, was completely unexpected. While walking in Namdaemun Market, I was approached by a group of teenage boys who begged me to take a picture with them. So I did! 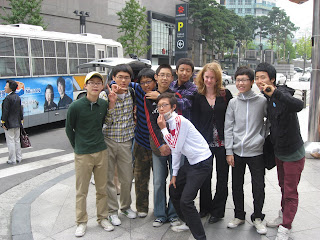 Yep, I'm the blonde one. Also, the only one not wearing Converse. Go figure!
Posted by Nicole Burnham at 12:05 PM

Aw, what an adorable pic. And what an awesome trip! I haven't done much traveling overseas and I'm very jealous!

I admire your ability to leave your computer elsewhere. I've taken trips without my own laptop, but someone else usually has one. Plus, I'm a big fan of writing things out on legal pads/in composition books before I type them out.
Good on you!

Fun pics. When we travel, I embarrass the hubby when I whip out my camera and snap the scenery. But it just must be done. LOVE that the teen boys wanted to take a picture with you. Good stuff.