I got to see novelists Mary and Carol Higgins Clark this week! 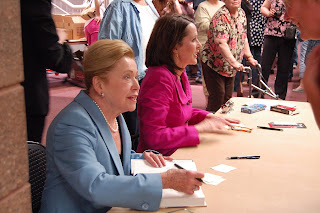 When I heard that the amazing mother-daughter suspense writers, Mary (left) and Carol (right) Higgins Clark, would be visiting a Northern Utah high school as part of the Davis Reads program (Davis County Libraries), and that it was FREE, I emailed some friends in my writing groups, saying, "I'm getting a babysitter and I'm so there!" I'm glad to report that seeing this lovely pair of novelists in person was worth every penny of the babysitting money. 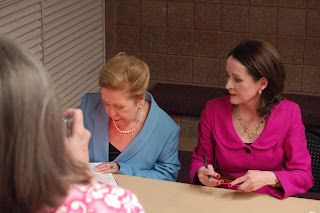 I was impressed that every novel these authors have written (28 for Mary and 10 for Carol) have been best-sellers. I bet not too many other authors can say that. I loved hearing about their journeys to becoming successful authors (Mary was a young widow raising five children), how Carol used to type her mother's manuscripts for her and learned a lot about writing from doing so, and their charming and thorough answers to their fans' questions. 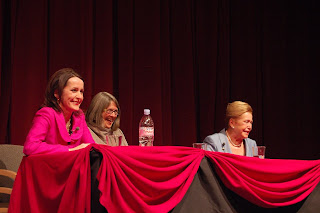 When discussing the craft of writing suspense, Mary said she likes to invent a main character who's ripped out of her everyday life (like picking her daughter up from school) by something beyond her control (such as a man hiding in the backseat of her car). She likes that the character is easy for the reader to relate to, someone who could, let's say, be the reader's niece. One day, Mary's editor was trying to convince her to have "the bad guy" be hiding in the closet instead of under the bed, where Mary had put him. Mary got a collective giggle from the crowd when she said, "Having a strange man under the bed is every woman's greatest fear ... or hope."
If you get the chance to see a live presentation by one of your favorite authors, I hope you'll go for it. And in particular, if Mary and/or Carol Higgens Clark (who are both published by Simon & Schuster, btw) are ever in your neck of the woods, be there.
P.S. These awesome photos were taken by Dimitria Van Leeuwen.
P.P.S. If you live near St. George, Utah, I'll be at the Barnes & Noble at Red Cliffs Mall at 3:00 this Saturday and would love to meet you!
Posted by Wendy Toliver at 12:54 PM

Thanks for sharing this with us, Wendy. Wow, to be so accomplished in one's career--that's definitely food for thought.

Maybe you will meet them someday, CuteandCuddly!

I hear you, Debbie. That shows how VERY talented they are.