Look up and wave, y’all. If you’re on the East Coast, chances are good that that’s me flying overhead in a commercial jet. I’ve been doing a lot more flying ever since I moved to an island. Thankfully, Bermuda is only a short jaunt home to New York/New Jersey—less than two hours! You could burn that much time sitting in traffic on the way to the Lincoln Tunnel!
My husband (then fiancé) and I had never been to Bermuda until we were flown out here for his job interview close to two years ago. I remember how unconvinced I was when other ex-pats living here told me that we’d be taking plenty of trips “off-island” as the often-used term goes. I doubted, because it sounded like an expensive lifestyle. But they were right. Once in a while, it’s good to take a breather from a 21-square mile nation in the middle of the lonely Atlantic Ocean. There’s family to visit, weddings to attend, and—as is the case next week—the book expo (BEA) to dive into. 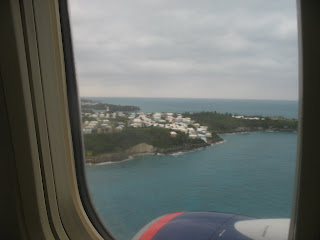 Once upon a time, I didn’t mind flying. I never even flinched during bad stretches of turbulence. It just felt like a bumpy bus ride to me. In fact, I was usually the one helping nervous flyers feel at ease. I used to love flying so much that I thought about taking flying lessons. But last month’s flight to Atlanta changed all this. The pilot was horrible, saying alarmist things like, “There’s going to be a rough patch for the next 15 minutes—I hope we get through it.” I kid you not. I literally had to search my iPod for gospel music to calm myself down. All the passengers were tense and quiet until we touched down.

This new fear of flying has got to go. I have to “shake it off” like Mariah Carey. I can’t very well swim across the Atlantic. And, for that matter, I can’t swim very well--across the Atlantic or across a pool. When I was moving here, my geographically-challenged great aunt asked if one can drive to Bermuda. That’s a Guinness World Record bridge if I’ve ever heard of one. So, like we say in Jersey, “whaddayagonnado?” No other way around it.

So, hope to see you at the book expo next week. But for now, gotta fly!
Posted by Debbie Rigaud at 1:03 PM