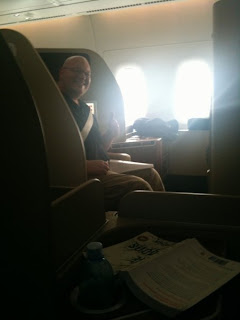 Hiya, Ro Com readers and writers! Long time, no post!
I could make a billion excuses, most having to do with deadlines writerly and decidedly-non, but suffice it to say:
it's been a big year for the Ostow-Harlans!
In addition to gettin' hitched, the hubs and I were lucky enough to be able to take an extended honeymoon: five weeks in Australia, Fiji, and Hawaii.
As you can imagine, I did plenty of reading while we traveled.
The pic is a shot of N flashing a triumphant thumbs-up as our plane taxies to the Sydney runway after a marathon flight. Those seats were actually comfy enough that I did manage to get some sleep, but you may note in the foreground that I was able to make some headway into a totally gripping book, too.
The title on my tray table is IN THE WOODS by Tana French, a thriller that's kind of like the best "Law & Order" episode, ever (that happens to also be set in the UK). I started the book on the flight at a friend's recommendation and finished it four days later in Sydney.
Yeah, if you're into that kind of stuff -- it's that good.
French's THE LIKENESS just arrived from Amazon and I'm actually holding off on starting it because I know once I do, it's pretty much ALL I'll do until I've torn my way from cover to cover.
While I was away, I made it a point to read "grown-up books" for a change, but since I've been home, I've been back in a YA groove-thang again. Most recently, I finished Lauren Oliver's BEFORE I FALL. People have described it as "Mean Girls" meets "Groundhog Day," but neither of those comparisons adequately convey the emotional resonance and authenticity of Oliver's voice.
Highly recommended.
So, what about you -- what sort of books do YOU save for your vacation reading?
Posted by Micol Ostow at 1:47 PM

I'm starting BEFORE I FALL soon! It sounds fantastic!