Did anyone in your life inspire you to become a writer...? 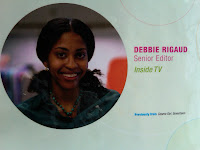 A few key events, rather than specific people inspired me to pursue a career in writing. In elementary school, I wrote plays and cast my little cousins in the roles. My good-sport-of-a-dad filmed our homemade productions. I also kept a poetry book—a marble notepad filled with catchy, rhyming stanzas capped off with inspired titles, like “The Fab Four” (read: what a group of us girlfriends named ourselves). And I can’t even begin to count the number of diaries I’d filled by the 9th grade. Writing was always a part of my personality. So much so, I didn’t give it much significance. I didn’t even give it much weight when I began winning essay contests that I entered to earn college money. And then early senior year, my guidance counselor got a call from the admissions office of my dream school, New York University. They called to ask her questions about little ole me! Huh? Apparently, they were really taken with my college application essay and wanted to know more about me. Of course, this caught me completely off guard, but it was extremely encouraging. I thought to myself, writing is viable. (p.s. I got accepted, but couldn’t financially afford to attend.)

Soon after, on the strength of another contest essay, The Star-Ledger, the local newspaper, awarded me scholarship money (through journalist Jerry Izenberg's Project Pride program, which awards college-bound city kids). Having my writing recognized by professionals in the field was a turning point for me. At the time, I was looking at comfortably settling into an undecided, undeclared underclassman existence, and my immigrant parents were pushing me to be more career-minded (“Pick a major! Your choice--pre-med or pre-law.”). So this recognition gave me the direction I needed. One look at the Star-Ledger plaque—which was titled “For Excellence in Journalism”—and something clicked for me. A few years later, I decided that my personality was best suited for magazine journalism, rather than newspaper or TV. My first magazine internship put me on a direct road to awesome magazine staff positions which, in turn, led me to an exciting introduction to the book publishing world.

Posted by Debbie Rigaud at 5:47 AM

What a great post! I wish more organizations supported writing prizes for teens/young adults. It might help some very talented people to realize that, yep, they just might have a future in writing!

Thanks, Niki. I totally agree. And I also owe thanks to my guidance counselor for introducing these organizations to me. She was amazing and exposed me to so much.

Isn't it funny how writing was such a big part of you that you couldn't even see it at first?

Thanks, Wendy!
@ Jenn--Yup. I'm trying to get back to that organic connection to writing I used to have as a kid. In my adult years, deadlines and other professional pressures have strained my relationship with writing a bit. It's interesting.