Who Inspired Me to Become a Writer?

Unlike a lot of authors I know, I only decided to try my hand at writing books later in life. Like, way later (30?). I always enjoyed writing and did well on writing assignments throughout my school years. Several of my elementary, junior high and high school teachers helped build my confidence, but they were general "you can do anything" types of messages.
Then I went to college and realized I should probably start trying to narrow this "what do I want to be when I grow up" thing down, at least a little. I did take one creative writing class, but it was kind of a neutral experience. I got good grades but my prof never really jumped up and down about anything I turned in. I found that neutral was a lot more pleasant than negative, though.
My honors philosophy professor (who the entire libera 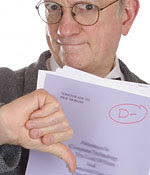 l arts building was named after) told me I could not write. He even brought me into his office to tell me this so it could have its full, devastating effect on me. Not only did he give me a bad grade on a paper I felt I'd done a great job on, it ended up making my GPA fall just enough to lose my honors scholorship. My heart wasn't set on being a writer at that point, but I'd only ever had positive encouragement from teachers and parents. I'd never been told I could not do something, ever! (I actually include this story in my school presentations nowadays.)
Thankfully I bounced back, and it was only a little while longer before the dean of my college called me up to her desk, handed me an A-plus paper and told me, "You can do anything you set your mind to, but if it doesn't involve writing, you'll be doing this world a great disservice." And guess what? She surprised me and one guy in the class with scholarships!
Of course its' a happy ending because after trying out a variety of jobs, I finally discovered that writing makes me the happiest and I've been able to work towards becoming a published author. In fact, my third YA, LIFTED, comes out in just a few days! So it's all good. Very, very good. :)
Posted by Wendy Toliver at 6:49 AM

Wendy--So sorry about your horrible encounter with the weirdo professor. Ugh. I have a friend who had the same thing happen to her, and all these year later, she still tears up when talking about it. We (your readers) are so glad you believed in yourself enough to pursue your writing career! xox

If it makes you feel better, I had a similar professor...and in the same department!

Goes to show you that you can't ever take one person's opinion over your own inner belief in your skills and self-worth. Go Wendy!

I think that professor has taught at every college, because I've had him too! Wendy, I'm so glad you persevered, and I'm excited about LIFTED!