How Do I Deal with Rejection? 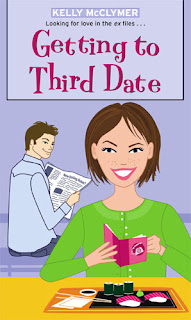 This is a great question for anyone to ask of herself. In fact, Caitlin (the protagonist of Getting to Third Date) is trying to fast track the relationship rejection process by finding a reason to reject all her potential boyfriends by the second date. Ultimately, she learns this doesn't actually help ease the sting of rejection.

By the time you turn 18, you've probably had friends (boyfriends, girlfriends, friendish folks) who suddenly don't return calls because they've moved on to the next new and shiny set of friends (lets call them drifters). You probably also have a few keepers -- the friends who stick with you when you move, cut your hair, get a boyfriend, lose a boyfriend, etc. It still stings when a friend you thought was a keeper turns into a drifter.

Take that feeling, and picture spending months and years on a book you love, then sending it off to agents and editors -- some of whom don't reply at all, some who say a polite and vague "not for me" and some who are quite rude ("your baby is ugly...and so are you"). Why would anyone subject herself and her work to that?

Well...for writers that's an easy question to answer -- because that process of rejection is the only path to published novelist (unless you self-publish, which is an entirely different post). When I was a new writer, I did my research and I understood that rejection was a fact of the business. So I was not horrified by my first rejection letter (for a short story that was all tell, with a character thinking about her job as a prison security guard presiding over frozen criminals she called corpsicles). As it happened, it was a lovely rejection as such things go -- instead of a generic "no thanks" I got feedback telling me that my story was all tell and no story.

Since that first rejection letter I've had success and more rejection--from the "I wish I could buy it" to the "I wish I could burn it and wash out my mind." Rejection doesn't bother me...wait.... Wrong. Rejection annoys me for three reasons: I sent the manuscript to someone who doesn't get it; I failed in my goal with said manuscript; and (worst of all) I have to go back and figure out whether to revise or simply resubmit until I find someone who gets it.

So, generally, to boost my spirits during the process, I just remember those friends who drifted away -- and the keepers who remain strong forever and enrich my life. If I had let the drifters convince me to stop trying to make friends, I wouldn't have the keepers who encourage and support me.

Kelly
(apologies for being AWOL lately -- starting a new company is very time-consuming!)
Posted by Kelly McClymer at 5:01 AM