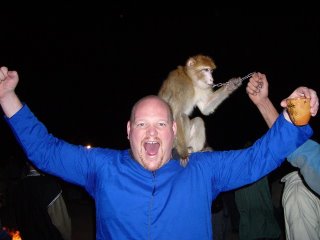 Yeah, I just about had a panic attack walking through the East Village last weekend and seeing the first set of X-mas lights up. Not that they weren't pretty. It's just, there should be a law against decorating for X-mas before Thanksgiving has even passed. That being said, I freaked out a little bit this morning when I realized that Thanksgiving is NEXT WEEK.

My anxiety, gentle readers, has nothing (or, at least, very little) to do with the idea of spending the holiday weekend with my boyfriend's family. They are lovely people, for reals, and as a matter of fact, I wrote a large part of GETTIN' LUCKY while on vacation in Las Vegas with them. I mean, check out the photo--clearly, NOT a high-anxiety guy. The primates, they love Noah.

But I digress. The point is...after Thanksgiving comes Chrismukkah, and after Chrismukkah comes New Years, and after New Years (and hopefully some sun in Palm Beach, if the Gods are smiling on me) comes....

Nothing.
Yes, you heard me. Nothing.
No more work.

Don't get me wrong--I'll be working. Just not as a book editor.
After eight years in publishing--three of which were spent moonlighting as an actual Writer--I've decided to try my hand at the full-time freelance thing. And possibly the starvation thing (cross your fingers for me that it's the former rather than the latter). I will also be returning to school after more years than I care to admit to get my MFA in Creative Writing for Children & YA. It's a distance program, meaning I get to spend a lot of my time in my apartment, in my track pants, bothering the dog.

Am I excited? Yes. Am I terrified? Um, yes. But deep down, I do trust my instincts. No more office--with pretty Hudson River view--does not mean no more challenges (in fact, it probably means rather the opposite). And I do think that it's time. Must be something in the air. I mean, it being the season, and all....
Posted by Micol Ostow at 12:31 PM

Woo-hoo and CONGRATULATIONS to you! What a big and brave step!

Congratulations, that's huge -- and it will be fantastic!!

This is the greatest thing you've ever done. Must celebrate all your soon to come and already here successes!

This is the greatest thing you've done to date!
We must celebrate all ast, present and future successes