A Different Kind of Writing 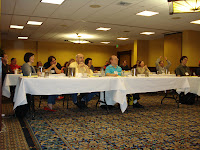 Over the weekend, I attended Ken Levine and Dan O'Day's sitcom writing workshop in L.A. (my trip has been wonderful, so far, with Screenwriting Expo a full week of fun). If you've ever wondered what a writer's fantasy camp might look like, the Sitcom Room workshop is the weekend long no-holds barred TV version. I loved it, and I am determined to break in (after the WGA strike is over, of course). I won't go into the whole setup, because my sitcomroom bud Keri does it best in her blog. What I want to touch on are two things: writing as a team, and seeing actors perform your scene.

As a novelist, I'm accustomed to writing alone (for the most part -- pay no attention to the editor behind that curtain), seeing my writing neatly bound (with gorgeous covers I didn't design but always love) into a book that can sit on a shelf to be plucked up and read...silently....by others (hopefully many others).

Sitcom writing is different. We were given a scene (the actors performed it for us as it was initially written), some basic info, and then broken into groups and sent off to rewrite said scene. I'd been nervous how that would work -- would I speak up/be heard/be funny/be annoying/be banned from the room, etc? And, the big one -- could I give up control of the final output? The answer was yes, I could speak up/be heard/be funny/be annoying and give up control of the final output. Sadly, I was unable to get myself banned from the room. That probably would have taken a few more days.

The biggest thing I learned was that it can be fun to write in a group -- we pushed each other farther than any of us might have gone alone (although one or two of us had to be pulled back from the brink a few times, too). At well after midnight, when we turned our scene it, I think we all actually thought it was funny. But the true test would come when when the actors performed our version the next day, and we all knew it.

The performance of our scene was nothing short of magical. Seeing jokes we'd written, lines we'd whittled away at endlessly (actors, not surprisingly, hate to deliver long speeches), and some of the physical gags we'd put on the page was a little bit like sneaking into my own brain for a peek at what my writing/reading looks like free of words and paper. Most interesting were the times the actors made our lines sound even better than we thought they were -- and the times when they didn't perform the scene according to direction (surprisingly annoying, I must say, although it made it clear how important the non-dialogue part of the writing can be at times for helping actors 'get' the scene). I highly recommend the workshop to any writer with a free weekend and a little (okay a lot) of extra cash.

The nice thing is that there is no age limit for fantasy camp, our youngest participant was 18 and the rest of us spanned all ages up to and including ...me... There were several writers, a lawyer, a stand-up comic, a documentary writer and producer, a programmer...you name the profession, it was probably represented (well...no doctors or pole dancers that I know of). There was someone from Denmark (who spoke English so well he had the idiom down as far as I could tell) and someone from Germany who is already writing and filming fabulous German short comedy. In other words, the only common denominators were talent and interest. I think talent was optional, but given the scenes I saw acted out, there was a lot of it in the room.

I know my novel writing will benefit from this weekend, no matter what.

Speaking of novel writing -- anyone who is interested in a weekend novel writer's fantasy camp, I can set it up for you for free (much cheaper than sitcom room since there is no need for a writing room, other participants, or actors). Here's what you do: go to the quietest room in your house (or sit at the kitchen table) with a laptop (or pad of paper). Wear comfortable clothes (or nothing at all). Sit down (or recline). Write. Drink coffee/tea/Monster as needed. Write more. Love it. Hate it. Edit it. At the end of the weekend: take a shower, be careful about shielding your eyes when you walk into the bright daylight, wonder if anyone will like what you wrote, shrug, and decide you'll think about that in about 300 more pages.

Kelly
Posted by Kelly McClymer at 9:43 AM