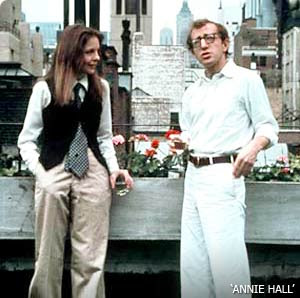 I love this question, since I sometimes still see my own life as a collection of scenes from my favorite movies. I LOVE Watts and Keith from the fabu Some Kind of Wonderful. I still remember that dark night back in 1997 when I told a boyfriend I couldn't see him anymore if he was still conflicted about his ex and I dramatically walked away from him down the street while rain softly drizzled. I could hear the music swelling in the background as I embodied Watts and prayed for the similar happy ending. (I got one a few weeks later when he realized he wanted to be with me).

When I actually fell in love in NYC (and what a great city to fall in love in!), I often saw my boyfriend and me as Sally and Harry from When Harry Met Sally or Annie and Alvy from Annie Hall, although admittedly, we were slightly less neurotic. Like those movies, the city is as much a character in the relationship as anything else.

Perhaps my most favorite movie couple was never actually a couple couple, but they were great together as best friends: Jane and Aaron from Broadcast News. They knew each other's little quirks and eccentricities so well that they could practically read each other's minds. It is something Aaron says to Jane in this movie that has become one of my favorite all-time movie quotes: "I'll meet you at the place near the thing where we went that time." And of course Jane knows exactly what he's talking about.

Hmmm...now I want to go re-watch that movie. And Annie Hall. And When Harry Met Sally. And Some Kind of Wonderful. Sounds like the perfect Valentine's Day movie marathon to me...I wonder if my husband will agree?
Posted by Deborah Reber at 4:20 PM