Where Have You Set Your Books and Why?

I set my first YA, Getting to Third Date, in an anywhere college town, mainly because I wanted it to be universal. Ever since I went to college at 17, I have lived in a college town. First University of Delaware, and then -- when my husband got his Ph.D. and a "real" job -- the University of Maine. I've taken classes on both campuses, but only earned a degree at University of Delaware. My first job, before I even began classes, was working at the University bookstore during textbook rush. Since then I've worked at both universities in many capacities (one day I'll write my memoirs, which will include my interesting stints working in various University offices at two big state universities).
I set my Salem Witch series (The Salem Witch Tryouts, Competition's a Witch, and She's a Witch Girl) in Salem. Duh. That was incredibly easy to decide, because the first thing I had for that book was the title. Of course, I had read about the Salem Witch Trials, and we'd read The Crucible aloud in high school English, but that was all I knew of Salem. So I had to do research and find out about the modern Salem. Which is awesome, of course. I recommend visiting in the fall -- they really do it up for the tourists. Just be prepared to be touched and a little shocked at how the witch burning craze touched so many innocent lives back in the day. 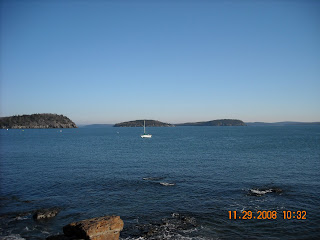 Must Love Black, my most recent release, is set in coastal Maine. I love coastal Maine, though I don't live there. One day, on a sailboat excursion with DH, I saw a house on a cliff and said, "That's where Philippa goes." There are many beautiful places, but the coast calls to me. The ocean that breaks against the jagged slabs of granite makes me feel like I've come home.
The manuscript I finished recently (title still in flux, though I think I may have hit upon the right one two days ago -- at last!) is also set in Maine. There's something about magic and New England that just go well together.
Of course, I may just hop across the sea to England for the book I'm in the process of drafting. But don't tell anyone I told you so. It's still a secret.
Posted by Kelly McClymer at 1:17 PM

I visited Salem when I was in high school. It's a beautiful town. I still remember taking a tour of the "Witch House."

maybe it's because I've only lived in the South and Mountain West, but I am so intrigued by New England, especially coastal towns. Maybe someday I can get out there to explore.