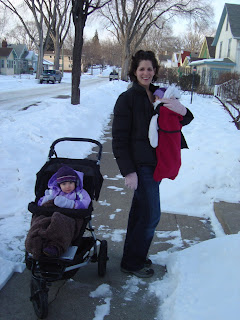 Back at the beginning of winter, I, Erin Downing, made a major move away from New York to Minneapolis (this picture showcases our never-ending snowy Minnesota winters and two of my cutie-pies). For the most part, the move has been good. But after having to shovel YET AGAIN (on April 1, no less), I'm sort of missing the less severe New York winters.

Here are 10 other things I'm missing about New York City (in no particular order...food is first because I'm hungry right now):

1) Ethiopian food and spicy tuna rolls
2) Robin Wasserman (a brilliant friend and author who helps keep me motivated...and who I desperately need to get me on track with the two books I'm writing right now!)
3) The subway
4) Taxis
5) Brooklyn Chocolate Stout beer
6) Spring...and with it the faint smell of urine that starts to develop throughout Manhattan right around now and peaks in the heat of August.
7) Good pizza by the slice...at any hour of the day
8) Walking everywhere (except when utilizing #3 & #4 above)
9) Proximity to Paris (I always said I'd take spontaneous "weekend trips" there...never did)
10) Unabashedly honest people

One final note: Since I made my political opinions known a few months ago, now I'd like to express my support for Jason Castro on American Idol. He's charming.

Spring...and with it the faint smell of urine

ROFL! I detected this when I was there in August, but I had hoped it was my imagination.

I am for David Cook, now that Chikezie is gone.

Ack. Snow. It is pretty...in December. Not so much in April. I hope we're done with ours and that you're soon done with yours.

Wow you live by me sorta! I am an Iowan! No one ever comes here :) Welcome to the Midwest