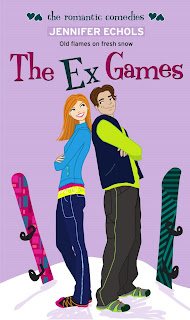 ...at least, if you're ready for a ro-com set in a winter wonderland! The publication date of The Ex Games has been moved up to September 8. You can see the description here, or listen to the soundtrack and read the first chapter here. Then leave a comment in my guestbook and tell me what you think!

However, as it is 90 degrees here in Alabama (and we think that's nice and cool for July), I am having a little difficulty getting into the winter spirit. I just spent a terrific 4th of July down at the 44,000-acre lake where I grew up, which is also the basis for the setting of Major Crush and The Boys Next Door. There was a boat parade in the morning--here's an example with somebody dressed up like a hot dog, and in the background you can see one of the bridges that inspired Lori and Adam's bridge in The Boys Next Door. 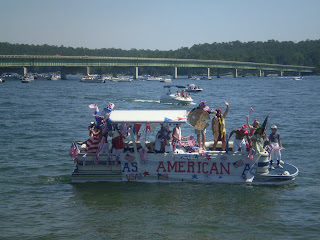 That night we watched the fireworks over the lake. After using the "fireworks" setting on my camera, I am no longer impressed by this feature, but at the bottom right you can see the lights of hundreds of boats that watch the show from the lake (I have done that too, when I was a teenager, and it was awesome). Under the fireworks you can see the smoke from burning bushes. It is not a party in Alabama until something catches fire. 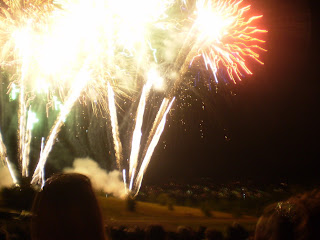 The 4th is over, but next week I'm going on the trip I look forward to every summer: the Romance Writers of America National Convention, where I see all my writer friends. If you live in the Washington D.C. area, you should definitely come to the charity booksigning next Wednesday night. I'll be signing Going Too Far, and you can meet other YA authors including Rosemary Clement-Moore, Melissa Marr, and our own Niki Burnham. Bring your mom, because Nora Roberts, Jennifer Crusie, Linda Howard, Allison Brennan, and my critique partner Victoria Dahl are always there, along with hundreds of others. If you miss me Wednesday night, you can come to the Pocket signing from 9:45 to 11:15 Friday morning (Going Too Far is published by MTV Books, which is a division of Pocket Books, which is a division of Simon & Schuster = the publishing industry is hopelessly complicated). And if D.C. is a world away from you, keep in mind that next July the convention will be held in Nashville.

After the convention, I have one more beach trip to go, and then my son goes back to school on August 10. So I guess the summer really is drawing to a close for me. How about your summer? What have you been up to? Do you feel like your glass of summery goodness is half-full or half-empty?
Posted by Jennifer Echols at 5:00 AM

Have fun at RWA in DC! I can't wait to read the Ex Games b/c a) love your books and b) love snowboarding!

Thank you Wendy! Wish you were coming this year!

I've been looking forward to EX GAMES--such a great title and a great concept for a ro com!