A visit to my alma mater

Last Saturday I attended a football game at Auburn University, where I went to school. I am pretty sure the football stadium at my high school was bigger than the stadium at many colleges (the editors for Major Crush questioned me on this: "Your high school stadium held 5000 people? Do you mean 500? Please check") so I thought you might enjoy a little tour of Southeastern Conference game with 87,400 spectators.

The first event of the day was Tiger Walk. Fans line up outside the stadium for a chance to see the coach and the football team parade by. Here is a picture of what Tiger Walk apparently looks like. But I am short, so this is what I saw. Please note that Elvis was in attendance. 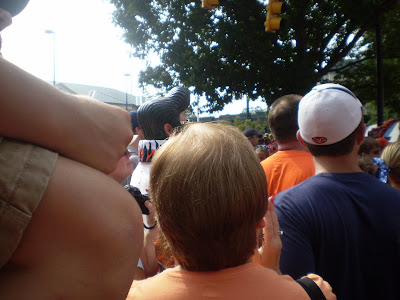 Then we entered the stadium for the pre-game show. Someone at Auburn is having a lot of fun making music video-style clips to show on the JumboTron. There's one for the university itself, one for the football team, and one for the MARCHING BAND!!! With apocolyptic music in the background, it starts with the drum majors stabbing the ground with maces, then continues to make trombonists and tuba players look like warriors from a movie trailer for 300. I wish somebody had made a video like that for me when I was drum major in high school, because I was totally that cool. 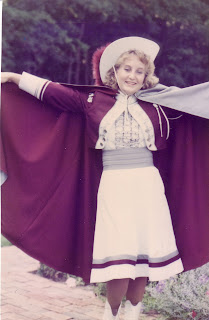 Maybe not. Moving on, here is the very awesome band spelling out something that was not legible from the eighteenth row: 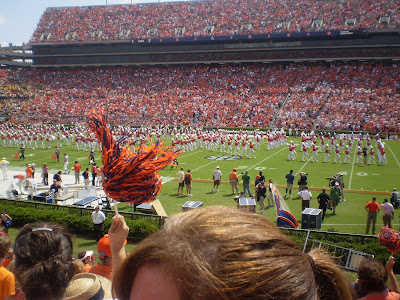 And, lest we start having too much fun and forget why we are all at college, here's a shot of the ten-story Haley Center peeking over the top of the stadium: 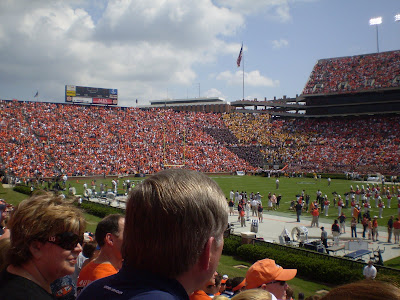 Almost every class I took while at Auburn, and every single class I taught, was held in Haley Center. I also made the mistake of taking the GRE (the college equivalent of the SAT) in Haley Center during the Tennessee game. If George paints the house red on Tuesday and Betty paints it green on Friday...*CROWD SCREAMS FOR TOUCHDOWN.* I honestly can't remember whether this was the time I aced the GRE or the time I pretty much flunked it, because I have done both. At any rate, if you are ever in Auburn, you should definitely take a tour of Haley Center. Architecture students across the U.S. study this revered building as one of the nation's premier examples of Ugly.

Wait. I forgot to take picture of the football game itself. Until a sudden downpour in the fourth quarter. 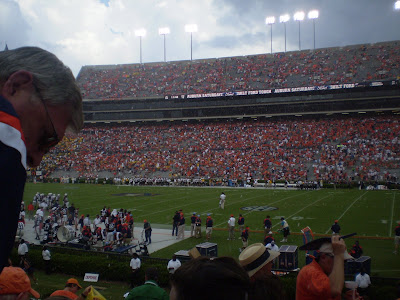 We got soaked, but we are die-hard Auburn fans, so we stayed until the end. Then we walked up to Toomer's Corner, where people throw toilet paper into the trees at the entrance to campus whenever the Tigers win. 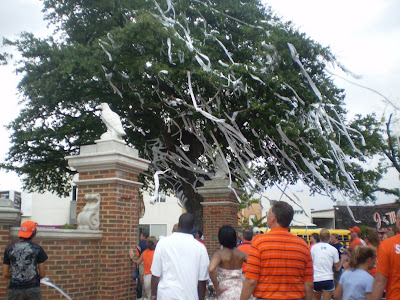 Because this is Alabama, and we are fancy like that.

What are some of the fun traditions of your college, or the one you hope to call your alma mater?
Posted by Jennifer Echols at 5:17 PM

Auburn's band is one of the best in the SEC. I always liked them at least.

ROFL! Too bad Tennessee has to play in Auburn this year.

*pushing up the house*