Since it's National Novel Writing Month (NaNoWriMo), and writing a novel really scares a lot of people, I figured I could use this space to share something I'm afraid of. It's not writing. My recent harrowing experience took place at an apple picking place (see photo reference A). 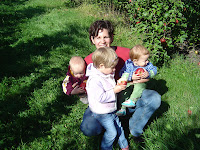 While at this apple orchard, I followed my little girl into something called a "Corn Crib", which is a structure whose floors are made of 1mm-thick plywood (under-exaggeration) and walls were straw (or something like that). There were approximately three thousand (major exaggeration) little people between the ages of one and nine running around inside this three-story human-sized cage. The Corn Crib had a single set of stairs that led up to a second level, then another set of stairs (really, more of a ladder) leading from the second to the third level. See photo reference B for a visual of the Corn Crib. 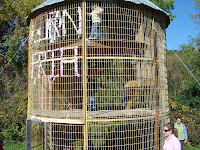 Once you went up the stairs to the top level, I discovered, you could never get down again. Because there was a constant stream of small people storming up the ladder and without getting past them, there was no way to get back to solid ground. The Corn Crib was shaking and shuddering in the wind, tossing me from straw-wall to straw-wall (in reality, it was maybe swaying 1/2 an inch or so). Here's me at the top of the Crib (photo reference C). 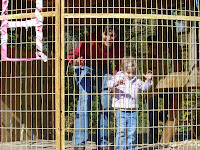 Yes, I was freaked out. I was one hundred feet above solid ground (okay, ten feet), held up by only a few scraps of particle board. Freaked out by a Corn Crib.

LMAO! This is like a zombie novel meets Jon & Kate Plus 8.

I am in the midst of NaNoWriMo, and normally I would find it terrifying. But I turned in the manuscript for my new Simon Pulse Ro-Com last week, and I'm waiting to hear what my editor thinks. Nothing is scarier to a writer than that.

LOL! I got lost in a corn maze once (a real, commercial corn maze a local farm creates for tourists). I always tell myself I can just run through the corn if I have to. But I can't help but think of those spooky Children of the Corn movies.