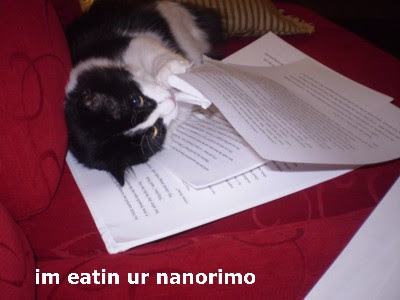 We're nine days into NaNoWriMo and I'm less than a day's word count off the schedule. I'm very proud of myself! It's a great feeling to have 50 pages of a manuscript after a little over a week of work. The only problem is that NaNo asks you to write a 50,000-word novel in a month, whereas the sort of book I'm writing needs to be 100,000. So even if everything goes according to plan and I'm declared a NaNo winner on November 30, I'll have another month of NaNo-esque work ahead of me before this book is finished.

The book I'm writing isn't a Simon Pulse Ro-Com. I just turned one in, and I write a lot faster than YA publishers want to put out my books. So this one's a paranormal romance for adults. However, this idea did start life as a Simon Pulse Ro-Com. In 2006, after MAJOR CRUSH came out, I needed to write another ro-com. I pitched this idea to my editor, who said she liked it but I couldn't write it because it was set in Las Vegas. Micol's GETTIN' LUCKY was set in Las Vegas, and her book would come out only two months before whatever I wrote next.

Of course, none of this was Micol's fault, so I never thought a single unkind or jealous thought about her. I played with what I had. I tried setting the book in New Orleans or Savannah or Key West. And when none of that worked, I whined. I told my editor that Las Vegas is very popular right now and it was perfectly okay to have two Las Vegas ro-coms back to back. She told me to stop whining and combine the plot of a second ro-com I'd pitched to her with the setting of a third. Thus THE BOYS NEXT DOOR was born.

I've always loved the idea for my Las Vegas book, though, and I'm glad I'm finally getting the chance to explore it. Some lessons about writing we can draw from this experience:

Is it just my imagination or is NaNo all over the blogosphere this time around? Do you have friends who've practically disappeared this month to work on their novels, or are you NaNoing yourself? How are you doing?
Posted by Jennifer Echols at 12:53 PM

I Nanoed (Is that a verb?) my first book, TIPS ON HAVING A GAY (Ex) BOYFRIEND.

I am not having an easy time of it, this year. I'm just thankful that you're my NANO word-count, Wonder Twin, Jennifer.

I'm a livejournal user and they won't let me post for some reason, I keep getting BAD REQUEST messages, so I have to do this anonymously, but this is Carrie Jones

Carrie, what's your user name over there? I keep trying to find you and you're hiding under some Sooper Seekrit Pseudonym or something.

And I NaNoed a manuscript four years ago. It's slow going this year, but I'm happy with what I'm doing so far. It's impetus, at the very least.

NaNo (na' no) v. 1. to write a 50,000-word novel in one month 2. to tell your husband you need to go Christmas shopping, then sit and write in your car in the parking lot outside the shopping center for two hours

I broke down and decided to Nano for the first time this year. I can't believe how encouraging it is to see all these other people talking about the experience at the same time.

Wow, look at that - I feel encouraged just reading it here and I'm not even at the mall in my car!

Back to Nanoing
bria

I'd been thinking of using NaNo for the project I'm currently working on for Penguin, but the deadlines didn't quite line up. But I love the idea and I'm definitely doing it next year. Plus, I keep trying to convince the fiance to do the Script Frenzy in March--I wanna co-write a slasher!
Glad to hear you don't still blame me! The good news is that it sounds like you got more mileage out of merging different ideas. I had a similar experience when pitching a project to Penguin to learn that they had just bought something along the same lines. I reworked it, and my novel is coming out with Puffin in Spring 2010. It's kind of a trip to see how much the book has changed from its original concept.