I am a reader. 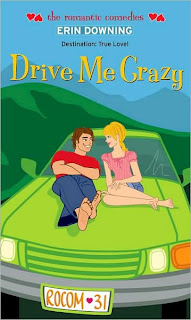 The title of this post may seem a little weird. I mean, I clearly love books so much that I choose to write them, so of course I read, right? Um...not always. Here's the thing: When I'm deep in the clutches of writing a book, I usually CAN'T read - because I tend to get so engrossed in the stories I'm reading that I can't shake them out of my head when I'm writing my own novel later that night or the next day.
But things changed while I was writing the book I just finished (it's called KISS IT and will be published by Simon Pulse next summer, but not as part of the Romantic Comedy line): I became a reader again. And an obsessive reader, at that. I found that the more I read, the more I wrote, and it became downright impossible to extract me from either the worlds of the books I was reading or the one I was writing. I was like a character for a few months, living in fictional scenes that had nothing to do with my real life.

To put the obsession in very boring list form, here's what just the last month looked like for me - and keep in mind I have a full-time day job, kids, and am working on writing a new novel. Sleep time is suffering, obviously. I finally read Looking for Alaska (John Green), dug into The Graveyard Book (Neil Gaiman), just finished the incredible Dani Noir (Nova Ren Suma), have gotten myself sucked into the world of The Chronicles of Vladimir Tod (Heather Brewer), devoured the latest Jennifer Weiner novel (Best Friends Forever), sped through a manuscript-copy of a hilarious novel called Getting Revenge on Lauren Wood (Eileen Cook), and am now in the middle of Wake (Lisa McMann), Need (Carrie Jones), Twenty Boy Summer (Sarah Ockler), and a novel by my friend Kirstin Cronn-Mills entitled The Sky Always Hears Me (and the Hills Don't Mind). I'm also snacking on Rampant (Diana Peterfreund), can't wait to start Once Was Lost (Sara Zarr), and have been eagerly-anticipating The Ex Games (Jennifer Echols)!

I told you it was an obsession. What else?! What else should I read?!
Later,
Erin.
Posted by Erin Downing at 1:03 PM

I can totally understand! I'm writing a book right now and I'm just wayyy too caught up with it (I'm trying to finish it before NaNoWriMo starts and I get to do another one!). I finally have all the books in the series (WOOT!) and ordered the last few ones, but haven't gotten the chance to read them yet. :( The way I am is: if I start something, I wanna finish it as soon as I can, just keep going nonstop. Which is a good AND bad thing. I start reading a book, and I will NOT put it down until I'm done. I start writing, and I just keep going and going like an Energizer bunny. Haha.

PS--The Ex Games is really good! Oh, and I don't know if you've ever read or heard about this, but it's one of my favorite books of all time: The Unlikely Romance of Kate Bjorkman by Louise Plummer. It's a little old (mid/late 90s) but it's AMAZING. Jahnna M. Malcolm's Love Letters series are very similar to the SP ones; I wish there was more than just the 4 books. I'm also a fan of the Avon True Romance series. They're historical romances, and so adorable. I've got a few other non-SP books on my shelf just waiting for me: Sarah Dessen's This Lullaby, Rachel Vail's If We Kiss, and Susane Colasanti's When It Happens.

Lock and Key by Sarah Dessen
was a really great book (:
Also,Thank you for replying to my e-mail ^-^ I appreciate it!

Lock & Key by Sarah Dessen was a really great book. I reccomend it (:. I am also in love with Geek Charming by Robin Palmer, I've almost finished it! The Harry Potter series, you can never go wrong with ^-^

I agree with the reading ideas getting stuck in your head while writing,I am such a book worm!
That could be why my stories are never done! I always have new and unfinished ideas!

Thanks for the suggestions, guys. I am just finishing up WAKE (by Lisa McMann, a bestselling Simon Pulse author) and it is SO AMAZING. Really awesome. Romantic in a totally different way, it just keeps making my stomach leap.

Oh, and PS: Analyn, I'm totally trying to get up the nerves to do NaNoWriMo this year - I always sign up, then chicken out and trip over my tendency to over-edit. Good luck!

Oh, I know what you mean! This is my first time doing Nano and I've never done it for the same reason. But this is the only chance I have, I won't have much time to spare after this year. I am SUCH a perfectionist, and I can't just leave things as is, so it'll be really interesting how it goes next month lol. Thanks so much! Good luck to you, too, if you do it! :) And feel free to add me as a writing buddy: http://www.nanowrimo.org/eng/user/513370.

I'm reading a ghost story romance set in Alabama, The Splendor Falls by Rosemary Clement-Moore, and it is wonderful.