Growing up, I loved to come up with creative, homemade costumes for Halloween. Mainly because most store bought costumes were junky, paper-thin jumpsuits with molded plastic facemasks held on by a rubber band. They were nothing compared to the full-on outfits you can buy at Target these days. But I also wanted to be unique. Not one of the mass-produced looks that was strolling the streets. I wanted to stand out.

One of my favorite costume ideas turned out to be my worst costume disasters. It was the year I decided to go for some international intrigue and be a spy. Not one of those black leather and spandex-clad spies you see in the movies and on TV these days. This was the 80s after all. I was going old school with the overcoat and the fedora. I even wore my sunglasses at night. My intention was for something like the art for Love Undercover.

But without the flowing blond hair.

I borrowed my mom’s raincoat, popped on an old hat, added sunglasses, and an eyebrow-penciled mustache and voila! 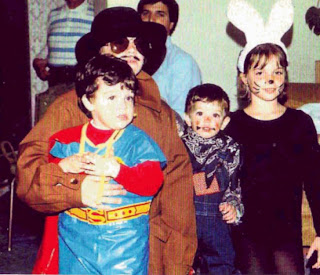 I was a spy! And see what a good spy I was? Smart enough to hide behind Superman. Because he’s bullet proof. The scarecrow and the bunny wouldn’t have protected me from enemies remotely as well as Superman.

I loved my spy outfit. I thought it was original and cool. I grabbed my pillowcase (none of those tiny, plastic jack-o-lantern buckets for me) and hit the streets. I was the baddest spy to ever walk my neighborhood.

Except that I got the same question at every door I knocked on: “Are you a flasher?”

Yep. People thought I was an eleven-year-old FLASHER!

Now, allow me to turn my story of a failed costume into a useful piece of writing advice. Because NaNoWriMo (National Novel Writing Month) starts the day after Halloween, you know.

One of the things I’ve learned from having a few books published is that not everything you write will come across the way you intend it. I once wrote a playfully innocent line of dialogue that was meant to be cute and sweet. Maybe even bring a smile to the readers’ faces. What I didn’t realize was that the sweet little line of dialogue could easily be misinterpreted as something very, very rude.

I never noticed it. My editor never questioned it. The copyeditor didn’t raise a flag. But the readers? Oh, yeah. They picked up on it. One person even said that she wanted to throw the book across the room upon reading that line. (I’ve always thought that was a wonderfully descriptive criticism and have used it several times myself when talking about other things.)

In hindsight, I can understand why people misunderstood the line. Although I think it speaks more to their messed up minds than to mine. But still it’s something you’ve got to be aware of. Readers grow up in different parts of the country. In different parts of the world. Places where soda is known as pop or cola or coke. Their experiences will be very different from yours.

Certainly, writers can’t go into the minds of every single person that will read our books and guess what they are thinking. But keep in mind that there is an audience out there that might not always get the joke. They may misinterpret your innocent line. There’s really little you can do to avoid it because people are going to think what they think. But as you’re editing your work, remember that many words have dual meanings. Which is why it’s helpful to have critique partners read your writing and catch something that you might have missed.

If only to minimize the amount of people who will later want to fling your book against a wall.
Posted by P.J. Ruditis at 4:48 PM

I know. I'm a horrible tease. But, no, it wasn't Love, Hollywood Style.

Great advice, P.J.! And what a hilarious (albeit, a bit creepy) Halloween memory. I'll never forget how cool I thought I was dressed up as one of the "Beauty School Drop-out" ladies (of "Grease" fame). Everyone thought I was in a Marge Simpson costume. :-(

I'm dying to know what line it was, too!

I admit that I had a similar costume disaster. My 1980s Valley Girl was widely misinterpreted. I had several parents wrinkle their brows at me and ask, "Are you a prostitute?"

When I said, "No, I'm a Valley Girl" some of them still didn't get it.