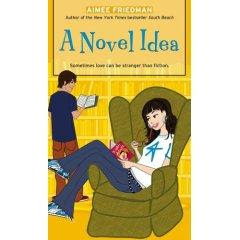 "Whether we are describing a king, an assassin, a thief, an honest man, a prostitute, a nun, a young girl, or a stallholder in a market, it is always ourselves that we are describing." -- Guy de Maupassant

Anyone who knows me well and reads A NOVEL IDEA invariably says, "Oh Aimee, Norah is so...you." And it's true -out of all my published novels thus far, Norah is the character who is closest to my true self -- the bookish, romantic (but mildly deluded) city girl who often makes a fool out of herself for the sake of love. Some key differences are that Norah is an older, not a younger sister; Norah grew up in Brooklyn, I in Queens; and (for better or worse) Norah's parents are a lot less involved in her life than my parents were when I was growing up.

But the novel I just finished writing --THE YEAR MY SISTER GOT LUCKY (my first hardcover--out from Scholastic in December 07!) has a character who is so me it's ridiculous. Her name is Katya and, like me, she is curly-haired, a ballet dancer, and has a close, complex relationship with her older sister. That's what the novel is about actually -- the two sisters, and how they change when they move to a small town. It was such a fulfilling experience, writing this book, but because it's so personal, it also gave me the most trouble. It's funny how when we write characters that are NOT us, there's a greater sense of freedom, a sense of play -- less investment. When our books are semi-autobiographical, there's more weight, more at risk.

But aren't all our characters versions of ourselves? I love the above quote by one of my favorite authors (if you haven't read his short stories--you must--they're fabulous exercises in economy and surprise endings). I like to think that some of my characters are not even a slight version of myself -- but, really, how can that be? They come from me, after all. It's like trying to deny that your biological children share your genes.

What do other authors think? Are most of your characters versions of yourselves? Or do you consciously try to separate yourself from the people who populate your fictional worlds?

Hope everyone is relishing in the warmth!

This sounds like such a great book. Love the title!

And this is such an interesting question! I haven't met any Simon Pulse Ro-Com authors except Niki. So when I imagine us meeting for lunch sometime, I picture our characters instead. Niki sketching, Aimee reading, Erin falling down in the doorway and me tripping right over her.

As for my own characters vs. me, I'd say Virginia in MAJOR CRUSH is a cleaned-up version. She definitely has her problems, but she basically has her act together and her priorities in the right place, and things work out for her as a result.

Lori in THE BOYS NEXT DOOR is a different story. While my critique partner was reading the manuscript, she e-mailed me and said "OMG YOU'VE WRITTEN YOURSELF!!!"

Wendy Toliver said...
This comment has been removed by the author.
7:28 PM

I've had a lot of comments that Amy Saiden's depiction of Roxy on the cover of THE SECRET LIFE OF A TEENAGE SIREN looks an awful lot like me. Does that count? :)

I think all of my characters are similar to me in some way, but I consciously try to avoid making them exact replicas. Claudia in 30 Guys works on her college paper, like I did, and crushes on the music editor, like I did. Oh, and we both have brown hair. And Emily in Emily Goldberg is half Jewish, half Puerto Rican. But almost nothing in that book ever happened to me. What I like about fiction is that we have the opportunity to take our lives and make them more interesting!

I definitely put a little piece of myself into every story.

Looking forward to yours - especially due to the ballet.