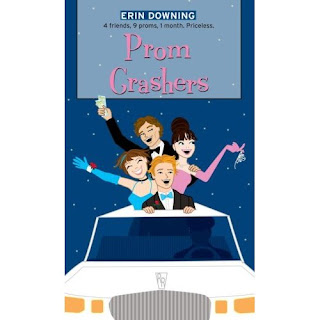 The ideas/proposals I was working on for a new romantic comedy didn't fly with my editor. Bummer. I am still developing some other ideas, and am working on a few other projects (not romantic comedy stuff), but I'm pretty sad that I probably won't spend this summer writing my next Simon Pulse Romantic Comedy. You see, I wrote both Dancing Queen and Prom Crashers over the summer months (in 2005 and 2006), and I was sort of looking forward to making it an annual tradition. Who knows? Maybe something will spark and I'll get my next Ro Com going...but until then, I have to turn my writing time to other stuff.

I just wanted to share this not-as-great news, since it seems like a lot of my author buddies on this blog and I tend to share exciting, positive updates on our writing lives. But I wanted to bring in the other side of the story and make sure it's clear that it's not always as easy as it might sound. We go through ideas and ideas and ideas, then drafts and drafts and drafts, and sometimes nothing comes of it. What our fine readers out there eventually buy is just one tiny piece of the stuff we writers are working on. There are a million behind-the-scenes hours of work before we even get to the fun part of writing the book that will someday be published.

So if you're an aspiring writer, remember to keep plugging away, even when it seems like nothing will ever happen. We all have tons of failures, and eventually (with luck) all those rejections and lame ideas and bad drafts will end with a shining success. And that's what makes it worth the work. So, of course, my head is still spinning with more and more ideas, and hopefully in the next few weeks or months or ... whenever ... I'll come up with a fun new idea and will get to start working on my next romantic comedy. Stay tuned.

One quick note of good news before I sign off: I just found out that Prom Crashers went into a fourth printing after only a few months on shelves. So, Readers, you rock! Thanks for buying the book!

Erin,
Thanks so much for sharing this with us all and reminding us that it's very hard to get a book published, even after you're multi-published. And huge congrat's on the multiple printings of Prom Crashers!!! WTG, girl. ;)

I would be happy to share a variety of my greatest hits rejection letters for those who are interested.

In other news--FOURTH printing? You're my hero.

Well, you know, Erin, you can still write your next romantic comedy this summer. So what if it won't get published, think of all the great authors who just wrote for fun and are now a huge success; J.K. Rowling and Stephenie Meyer are a great example. Just because your publisher didn't like your ideas doesn't mean they can stop you from writing what's in your heart.