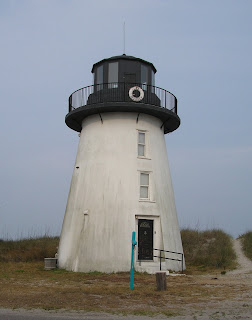 Okay, the islands were all fairly close together, but I had only been to one of them before. These isles run along the Georgia/Northern Florida coast, and they come in all phases of development and charm. My younger brother got married on Jekyll Island at the Jekyll Island Club Hotel, the former yacht playground of J.P. Morgan and the Rockefellers. The outdoor wedding got rained out but still turned out lovely, and the wedding party had its own mansion for the weekend. Jekyll is very kickback and under strict anti-development rules, so it's a nice place for a quiet vacation with almost deserted beaches.

Following two nights there, it was on to Hilton Head Island off the coast of Georgia. We used to go to Hilton Head when I was a kid, and it has changed from a sleepy backwater to a fully developed city with championship golf courses. No more crabbing for dinner off a rickety dock, but on to a first-class restaurant. There's a spooky old pre-civil war cemetery on Hilton Head, which I used in my book, THE WITCHING WELL, but even it's been cleaned up and gardened. Spoilsports! Savannah is close by for an added plus.

San Simon Island is also civilized but less snooty than Hilton Head. Seems to attract a younger, more beachy crowd, and has numerous bed-and-breakfasts instead of swank resorts. We really liked it there, and we saw a lot of vacation rentals. We also like Amelia Island, Florida, where we stayed in an aged motel right on the beach. Amelia Island is very charming and old-school, with ancient beach bungalows built to resemble lighthouses (see pic) and rickety outdoor bars with live music.

Last but not least, Anastasia Island. This is off the coast of Florida and houses most of the beaches for San Augustin, longest inhabited city (by Europeans) in the USA. Great history there and beautiful beaches. Don't miss the Gator Farm and the old Spanish quarter. It was a joy to have all the family together for my brother's wedding, especially all the female cousins. And their boyfriends! Yikes! Who's gonna foot the next one?

Sounds like a wonderful time. I love that area! Definitely a great setting for a book. :)

Ooh, my fam and I used to vacation in Hilton Head. Fun memories. Have you read Pat Conroy THE WATER IS WIDE?

No, Micol, I haven't read that Conroy book. I'll look it up. Some cousins of mine had parcels of land on Hilton Head that would be worth millions today, and they traded them like bubble gum cards.