a hidden gem, a summer party 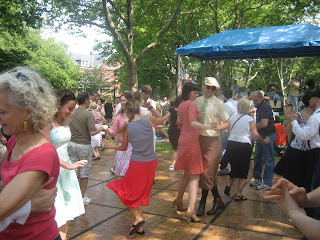 Up until this weekend, I'd never been to Governor's Island. It's a hidden gem, a small stretch of green, lovely land, located in the middle of New York Harbor, between Brooklyn, Ellis, and Liberty Islands. Up until 1996, it was used as a military base, so it's full of old forts and beautiful, sprawling homes in which the officers lived with their families.

My boyfriend's friend told us about an annual summer bash held on the island -- a Great Gatsby-themed swing dance/picnic, so naturally we were on board. We caught the ferry down at the tip of Manhattan (Whitehall/South Ferry) and rode it a mere seven or so minutes (perfect for me, because I'm not a fan of long boat rides!), enjoying the wind on our faces and admiring the view of Lady Liberty. Once on the island, we weaved through stately homes, tree-lined roads, and grassy stretches along the river to reach the picnic grounds, all the while feeling that we'd fallen into some sort of other world, a dream-place. The island is basically deserted (my boyfriend and I went exploring in one of the beautiful houses, and it was absolutely empty -- not even a stray piece of furniture), which makes it feel even more surreal...but enchanting. The feeling of we're-not-really-in-2007-New-York-anymore got stronger when we reached the bandstand and saw people dressed to the hilt in flapper garb doing the Charleston while guys in straw boat hats strolled alongside ladies with parasols. We hadn't dressed up in costume, but we still felt quite fabulous in our summer clothes as we lunched on cheese, crackers, lox, olives, and watermelon on our blanket. 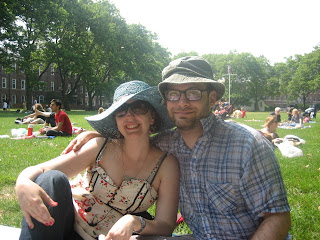 We learned that Governor's Island is open to the public (for free) on Saturdays and Sundays this summer. Now that I'm taking some MUCH-needed time-off from writing (at least until the fall), I'm planning on doing some more picnicking out there -- forget overcrowded, overrated Central Park! If you're in the NYC area, please come out and explore this little secret nook of splendor on the harbor.
Posted by Aimee Friedman at 8:47 AM