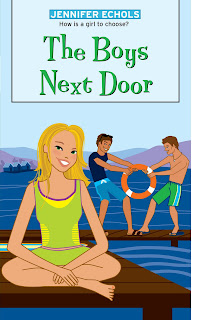 In a little intro to How NOT to Spend Your Senior Year, Cameron talks about what is and isn't true in her book. In that spirit, I thought I'd clue you in on a few things that are and aren't true in THE BOYS NEXT DOOR.

I grew up on a beautiful lake in Alabama, but there is no Crappie Festival on Lake Martin. There is, however, an Interstate Mullet Toss at the Flora-Bama Lounge down at the beach. People try to throw a mullet across the Alabama/Florida state line. I have never been to the Interstate Mullet Toss myself. My first job after college was as a copyeditor for the Montgomery newspaper. My boss was a very low-key person, so I was surprised when she came in looking sort of bedraggled one day. In fact, she looked like someone who had spent the weekend in the sun, throwing fish across the state line. I've been waiting to put the Interstate Mullet Toss in a book ever since.

The bryozoa is 100% real and I have accidentally touched it more times than I can count. *shudder* (The link goes to a Wikipedia article that I'm considering updating because it's incomplete. It does not contain the terms slimy or ugh.)
Posted by Jennifer Echols at 3:05 AM

I want a "Crappie" t-shirt! LOL

LOL! I looked for one when I was in town the other day and they don't have them!!! They do still have a lot of deer head T-shirts tho.

Maybe you could design your own and sell it at Cafe Press. Could start a trend. ;-)

I am actually thinking this through. Where would I get a copyright-free picture of a crappie? Hmm...