Just in time for band camp... 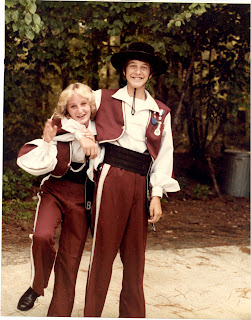 It's band camp season! Ah, twenty hours a week on a football field in the hot summer sun...the tantalizing watered-down Gatorade...the gnats. August is also the anniversary of the publication of Major Crush. This book is now in its fifth printing, thanks to you. I really appreciate your support!

To celebrate, I'm running a contest. Here's a pic of my brother and me wearing the Worst Band Uniform Ever. All you have to do is e-mail me at echolsjenn@yahoo.com with a description of an even worse band uniform. It can be your own uniform, or the uniform of the marching band across town that you have always felt a little sorry for. The first five entries receive a copy of Major Crush. I'm holding out hope there is a band uniform in the world worse than mine. I'm sure it involves sequins. On polyester! 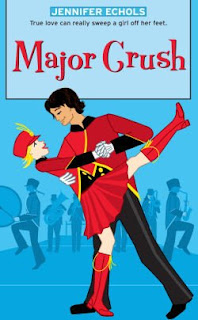 Speaking of which, the Drum Corps International championships were held last night and Phantom Regiment won, which is really nice because they came in second last year. DCI is an organization of super-bands for ages 14 to 21 that practice and compete all summer. I wanted desperately to join when I was in high school, but they only take brass and percussion, and I was a woodwind player. However, Barbara Caridad Ferrer was a member, and she has written a wonderful drum corps novel called So She Dances coming out in 2010, so we can all live vicariously that way. I also have a cousin in Alabama's corps, Spirit, but I can't tell you his name. My goals as a YA writer have always been (1) to write the best books I can, and (2) to avoid embarrassing my teenage relatives.

And we can live vicariously if the finals are on TV again this year. Last year I couldn't find a TV listing at all. Then Barbara, Vicki, Cathy, and Marley all individually e-mailed me to say they were watching it right then on ESPN2. Of course, I didn't check my e-mail until the next morning, twelve hours too late. Next time pick up the phone, people!!! If I figure out when it's on, I'll post the listing here and we can all watch. Though looking around the DCI site, I don't see any really bad uniforms this year. Back in the day I saw some crazy outfits, like the U.S. military meets Hello Kitty. I'm talking to you, Star of Indiana.
Posted by Jennifer Echols at 2:48 AM

You win. But only if there were sequins.

We had twelve-inch-tall, rounded, furry hats with a plastic chin strap. Which worked when we wore them for the Christmas parade in MN, but were not fantastic when we marched at Disney World.

My sophomore year in high school, the guard uniforms were horrible -- white bodysuit, floor-length navy skirt (with a two or three inch ruffle at the bottom) and an orange sash. Oh, there was probably a headpiece of some kind.

Gosh, all these uniforms ARE more horrible than mine! And I thought my toreador outfit was something special.

I feel a Halloween costume coming on....